About democracy, justice and double standard, the same applies to Singapore

Reading the ST article “KL slammed for arrest of 29 after rally against new tax” and the latest development of TRS (“Govt orders shutdown of The Real Singapore“), Askmelah can not help but have to agree with the following statements made by the Malaysian protestors. The same sentiment should be applied to Singapore’s democracy and double standard (while ST is free to report factually what is happening in Malaysia or other countries, such reporting about Singapore can rarely, if not never, find its way in print. Another case in point:” The Media Development Authority’s (MDA) decision to act against The Real Singapore reflects the light touch it has pledged towards content regulation, said media observers and academics TODAY spoke to.”, the Government shut down a website and started legal proceedings to its editors, which in any developed country will consider a drastic move and here our “official” mouthpiece called it “light touch“. This must be a sick joke IMHO ) as well:

“Expressing views and holding a peaceful public march should not be considered a crime in Malaysia or anywhere else in the world.” – Human Rights Watch Asia division deputy director Phil Robertson

“The latest incident reflects the double standards practised by the authorities, pointing to a recent demonstration against a local church where no arrests were made. …..Which is more likely to threaten peace and harmony, if that is the standard being employed? A protest against tax, or a protest against a religious symbol?” – Lawyer Syahredzan Johan

[Updated 11May1015: MDA did the ‘right thing’ to shut down TRS as racial and religious harmony most important: Yaacob. Askmelah Note: Urrl… I thought the triggering event was about an “fabricated” article accusing an Filipino family for complaining about the noise generated in Thaipusam possession, the TRS is also famous for publishing anti-Government and anti foreigner articles, how does anti-foreigner has any thing to do with religious and religion? His statement also contradicted to the earlier Media Development Authority (MDA)’s statement that its decision to shut down the siteby  saying that TRS had published material that was “objectionable on the grounds of public interest, public order and national harmony”. If Yaccob is the minister in any developed country, you can be sure he will either be thrown out or face a huge demonstration in no time. Self serving argument that holds no weight in a democratic society.]

Talking about Justice, what about fairness on the following incidents? Assaulting someone is less of a crime than just saying something [Updated 11 May 2015: Man gets 3 weeks’ jail for slapping blogger Amos Yee] ? 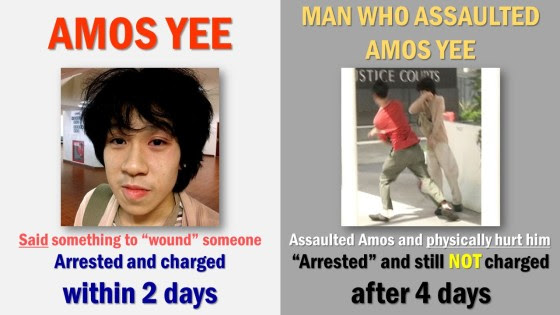 If what Amos Yee transmitted in his video is sexual images, what about this?