↓ Skip to Main Content
Home › Dirty Politics › AHPETC Bashing – What is an MP role? Should Town Council law be reverted?

AHPETC Bashing – What is an MP role? Should Town Council law be reverted?

“Too often, the debates on AHPETC took on the flavour of verbal wars, where scoring political points seemed to be the order of the day.” – Singapore Management University (SMU) law don Eugene Tan

“This is wicked politics at its damnest, perpetrated at the expense of the interest of ALL Singaporeans, including PAP’s own supporters, residing in an opposition run ward. I personally find such politics unbecoming, deplorable and despicable, when citizens’ interest are made secondary to a political party’s self-interest. It is awful to see the depths that the PAP brand has now sunk to.” – Thetwophilo’s Blog

“PAP ministers and MPs should examine themselves in the mirror to get a clear image on how hypocritical and self-righteous they looked when they bombarded WP on their lapses in Town Council management.”- WonderPeace

“In net effect, the berating of AHPETC using precious time in Parliament was not about accountability. It was also not about the rights of citizens, as the actions of MND have proved. But if it was about politics, then it was clearly not the smart kind.” – Howard Lee

“Coming on the heels of the columbarium ‘oversight’, a fare hike and the more distant trespasses through Woodlands Checkpoint (and how about Mas Selamat?), I bet there were more than a modest number of people who cringed as these daggers were thrown wildly seemingly without second thought….the often sanctimonious and bizarre language used (think Minister Khaw Boon Wan’s mention of Harakiri) was shocking. Colourful stories can be used to great effect. These, however, were better as negative examples of what not to say.”– Amos Maximilian Lee

“But grants are real money, without it, it will cause liquidity problem for any town councils, not only AHPETC….The PAP wants to kill AHPETC by creating liquidity crisis.” –Piji Tailai

“When you make someone start from scratch while taking away their funding, you (can) only expect failure.”

“There are many observations made in the AGO report but at the end of it all, the buck stops at AHPETC. I can’t remember if any minister has ordered any audit on any ministry or organ of state in recent times due to disclaimers or adverse opinions expressed by its auditors but nonetheless AHPETC had co-operated in this audit and will take lessons from the findings in the spirit of public accountability and good corporate governance.” — WP’s MP Png Eng Huat

“And such systems are not cheap to develop. The old system at Aljunied Town Council cost over $20 million, hardware and software, split among the other PAP town councils. AHPETC has spent over half a million dollars just to replicate what the old system could do and we still have a way to go. Isn’t that a waste of resources and public funds? Setting up a centralized computer system will certainly safeguard residents’ interest and money, no doubt.” — WP’s MP Png Eng Huat In conclusion, the whole incident looks silly and laughable, reminding us of an first world economy and third world politics. Both sides, esp the PAP need to stop thinking how to fix the Opposition, needs to grow up and works for the common good of Singapore’s future. A weak opposition will do Singapore no good in the long term when the voters ,one day in the near or distant future, are sick of the incumbent’s failure and voted in an untested party to govern in desperate times. It will be the failure of PAP’s for not leaving a stable and sound political system. The incumbents in Taiwanese, the Koreans, the Japanese all have lost their rulings within the last 2 decades, it is only a mater of time it happens to Singapore. It will be an utter failure on the part of PAP if the system failed in the hands of the Opposition due to a flawed system, just like in this AHPETC’s case which is attributed to PAP’s own legacy. Or so claimed by the PAP Government who wants the voters to believe the AHPETC is a complete utter failure, which in most AHPETC voters’ mind is likely not, and the voters will prove Askmelah right in the next election. Just watch.

“Estate-management wise, I’ve lived here for 26 years and honestly, not much has changed since the handover [from PAP to WP].” “In man-on-the-street video interviews, one resident also told Yahoo Singapore that she has seen little difference in the management of her estate whether under the PAP or WP.” – Yahoo News

#The system of town councils was first introduced in 1989 to ensure that any political party aspiring to form the national government first shows that it can run a town council competently. As another opposition party NSP has pointed out “Any suggestion of a correlation would imply that the best people to govern the country are town planners and estate managers, which cannot be true.” 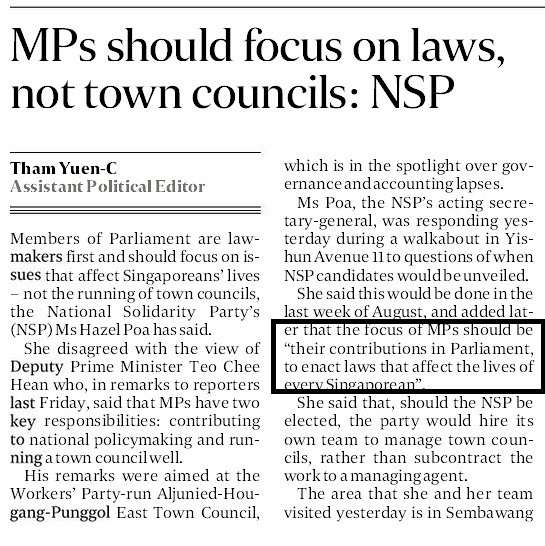 What was missing that we know now is the lack of continuity when one disgruntled defeated party refuses to hand over the system properly, the lack of scale in both procurement and IT system vis-a-vis an incumbent, duplication and inefficient use of resources and the worst is the aversion of commercial entities in bidding for an opposition TCs’ contract which may endanger their other contracts or chances with the incumbent party, perceived or otherwise.

MP’s role should be reverted back to enact laws, bringing the constituents’ voice to the parliament and helping to resolve their woes to the relevant agencies, running of the Town Council should be reverted back to the Government agencies. PAP should have anticipated this mess in the first place and should resolved this mess that they had created. It is time for PAP Government to fix it rather than pointing finger at the oppositions.

As the WP’s management of AHPETC continues to draw rigorous debates in Parliament — right up to the most recent sitting and beyond, political observers and analysts were split over whether the AHPETC tinderbox sparked more heat than light.

Nevertheless, they agreed on one thing: The debates on the topic, which were at times acrimonious, stood out in the second half of the 12th Parliament, which began with a fiery exchange between Senior Minister of State (Education and Law) Indranee Rajah and WP chief Low Thia Khiang over what constitutes “constructive politics”. Assoc Prof Tan said: “Too often, the debates on AHPETC took on the flavour of verbal wars, where scoring political points seemed to be the order of the day.”

Assoc Prof Wong felt too much airtime had been given to the issue. “I thought that was a lot of hot air, and Parliament time could have been better spent debating issues that would affect Singaporeans’ quality of life.”

But former Nominated MP Calvin Cheng disagreed as he felt the AHPETC debates were very important. “Because MPs have two responsibilities — one is to manage the town council and the other is their performance in Parliament. So if an opposition party can’t even manage a town council properly, how can it manage a country? There are no jibes, I see those as very important questions.” [Askmelah strongly disagreed with Calvin Cheng’s shallow view on the role of an MP, see the paragraph in purple below]

As Singapore gears up for the coming GE, there has been some discussion on an MP’s dual roles — looking after his or her constituents and their estate, and being a voice for them in Parliament by raising their concerns and contributing to policy debates.

Assoc Prof Tan said: “Neither should take priority over the other. While most MPs get elected or re-elected on the basis of their role in the constituencies and town councils … their contributions to the law-making and policy-making process should not be shortchanged.”

Journalist Chua Mui Hoong was right to point out “Your MP is not the Chief Social Worker. MP supposed to raise issues and make laws”. A Member of Parliament is by definition someone who represents our voice in Parliament.

They and they alone have the privilege of voting within the debating chamber, thus helping to shape laws and policies concerning transport (MRT, taxi fares), the environment (flooding, mosquitoes) and healthcare (Medishield, hospitals), for example, through debating with the government ministers and holding them to account.

Everything else they do is secondary to this task of law-making.

Professional managers can run the town councils. Therapists can listen to your woes. A neighbour can write your letters. Churches, temples, and other voluntary groups are feeding and housing those in need. Social workers can look after dysfunctional families.

0 comments on “AHPETC Bashing – What is an MP role? Should Town Council law be reverted?”

1 Pings/Trackbacks for "AHPETC Bashing – What is an MP role? Should Town Council law be reverted?"