[Updated 12 Sep 15] Democracy has spoken, Singapore ruling party won with a landslide victory of close to 70% vote, dealing a blow to future democracy in Singapore. The majority stork in Singapore wants stability, tangible benefits, material well beings over intangible benefits such as freedom of speech, caring and a more listening and fair Government. No one can argue that it is wrong, everyone is entitled to their own views and rights as a voter, just like what Kenneth Jeyarathnam had said over the TV last night: “I guess Singaporeans get the government they deserve, so I don’t want to hear any more complaints.” Let’s brace for more floodgate open to foreigners and GST increase to 10%. My fellow Singaporeans, you have dealt a deadly blow in GE2015 to the opposition parties and a better tomorrow for our children, RIP!

“What I want to remind the PAP is this: It is important to build trust between the people and the national institutions … including the civil service, the judiciary, and the mainstream media. They have to … not only act fairly but to be seen to act fairly … I think it is important for the future of Singapore … Any politicisation of these institutions to gain political advantage, to me, is against the national interest.” – Low Thia Khiang

“Nonetheless, the silent majority has “spoken”. They don’t really need any voice. They don’t need any heroes and they don’t really mind if the winner resorts to threats, bullying tactics and doesn’t play fair. Humans are complex creatures. I don’t know who I can trust, but I definitely don’t trust people who don’t play fair. Sadly, the Hougang and Potong Pasir spirit may fade away before it can spread to the rest of Singapore. There are already potential First World politicians out there but I may never see a First World electorate within my lifetime, not with 6.9 million (mostly new citizens) becoming a reality. Meanwhile, I’m still watching Thailand.” – Chan Joon Yee

“Are Singaporeans truly integrated with new citizens?  The true decision makers, men and women obsessed with development, urbanization, and wealth, are mad.  The current population trajectory is tantamount to a government biting off more than they can chew. What next? A suburban housing project on Coney Island…. Economic expansion will not bring happiness, instead it will usher in unprecedented misery in the people. Why do the people not learn from history? Perhaps they believe that they are capable of great miracles, a narrative familiar to all in Singapore. Time will tell.” –JC student 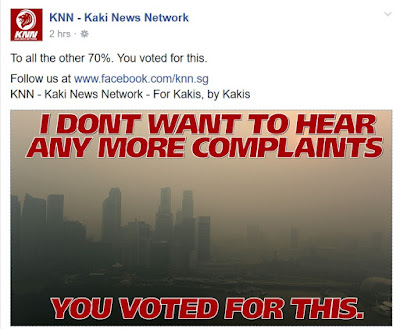 “I am afraid the cruise ship is over capacity limit, and it used to be a luxury cruise ship. The designer’s claim that it is not sinkable, the name is Titanic. There are not enough life boats, no preparation or provision for failure. Thank you Mr Goh for reminding us.” – Low Thia Khiang

“The stretching of the letter of the law to skew election conditions to the benefit of the ruling party continues unabated. Elections are timed for when the “ground is sweet”; rampant gerrymandering favours the ruling party while undermining MPs relationships with their residents between elections. Campaigning is limited to a ridiculously short window of nine days, which leads to shallow politics and only cursory familiarity with candidates before votes have to be cast. All these distortions of the democratic process are unjust, and rather than accept them as a matter of course, election time is precisely when we should call them into question.” – Judith Huang

“Till today, I am still puzzled by why the PAP cannot fight a fair election without gerrymandering, abusing the GRC system, basically, making sure they enter into a boxing ring with an opponent who is expected to fight them with hands tied behind the back. There is a reason why bullies are not popular in schools. Why not be the school prefect?” – Alvinology

“Singapore today is at a crux, and at no other time are Singaporeans more aware that the old formula is broken. We need critical thinking, new ideas and disruptive creation. We cannot continue with business as usual, tweaking old policies and methods.” – Howard Lee

“My life has been an open book for ridicule and attacks from PAP and its supporters. I hope you don’t ridicule me and my wife, taking our home as a little sanctuary where, when we close the door, it’s just us and our children in a little corner of the world where the PAP can’t get in.” – Chee Soon Juan

Below are the headlines screaming the message that the mass media want us to take note of and here are Askmelah’s take (mind you these are just a small fraction of the waves of headline-grabbing news about the election):

“PM Lee asks for strong mandate, says coming polls is for Singaporeans to decide with the PAP how to take the country forward”

Askmelah: You likely not going to get one, not a strong one at least going by the many problems tackled over the last five years but largely unsolved such as transport, high property prices, overcrowding, stagnant wages, hospital bed crunch etc.

Askmelah: Sylvia Lim’s answer to Khaw Boon Wan’s accusation that the AHPETC gave contract to their friend to earn excessive profit. Surely your friend will not sue you in times of trouble esp if he has taken good benefits from you.

“Singapore is at a turning point, question is which way we go: PM Lee”

Askmelah: surely we cannot let a dominant party and a big government to continue this way. No democratic and developed nation in the world can continue that way, Singapore need more check and balance. Actually the turning point started in the watershed Election 2011.