“Sugar dating” sites, which pair young women with rich older men willing to pay lavishly for companionship, have, in recent years, begun targeting people in Singapore. And hundreds have been signing up, leading to some to call for them to be banned as they could draw young women into prostitution.

Sugardaddysingapore.com is run by a United States-based sugar dating agency, and has a list of 500 women and 60 men from here.

In the case of seekingarrangement.com, which is also based in the US and is founded by Singapore-born businessmen Brandon Wade, 1,200 men and 700 women from Singapore have active accounts.

On whatsyourprice.com, where men make bids to ask women out on dates, there is a list of 250 men and 350 women from here.

Most of the Singapore women at the popular seekingarrangement.com are in their 20s, but about 50 were 18. Many posted photos of themselves in suggestive poses, or dressed in bikinis or lingerie .

A 19-year-old student, who calls herself Annab89, joined the website in March. She wrote in her profile: “I am looking for a short-term sugar relationship, for now, though that most definitely could change. I am bisexual, so sugar mommas and dads, I want you!”

Several were upfront about “prices”. “Looking for monthly financial support of $4 to $6k with meet-ups once or twice a week,” wrote 25-year-old ReiReiXX, who joined the website in April.

Several men were explicit about their intentions.

“I don’t want to kid anyone here that I’m only seeking meaningful deep conversations with somebody beautiful and smart,” said a 43-year-old film director, who stays in East Coast. “Please don’t contact me if you don’t even enjoy sex.”

But others claim they are not looking just for a sex partner.

“I am a regional sales director and stock trader and can teach and guide you in stock trading if you are keen,” was one response a fictitious account set up by The Sunday Times received from a 46-year-old man who lives in Alexandra. Another 34-year-old finance professional offered $200 for a first date at whatsyourprice.com.

It is free for women to join these websites, but men have to pay as much as $100 per month to make contact with women. These men are mostly in their 40s and 50s and listed occupations include lawyers, traders or marketing directors. Around 350 men listed their relationship status as “married but looking” on seekingarrangement.com.

These websites have kept a low profile in Singapore, unlike controversial Canada-based dating portal Ashley Madison, which connects would-be adulterers. In November 2013, it announced plans to launch a Singapore site, but that was quickly blocked by Internet regulator Media Development Authority (MDA) as “it facilitated extramarital affairs and declared it would specifically target Singaporeans”.

But there are no similar plans for sugar dating sites, which are growing in popularity around the world. The largest of them, sugardaddyforme.com, reportedly has more than 45 million members. An MDA spokesman added: “Site blocking is not a comprehensive and foolproof solution. There are many sites with undesirable content on the Internet, and it is not practical to block every one of them.” 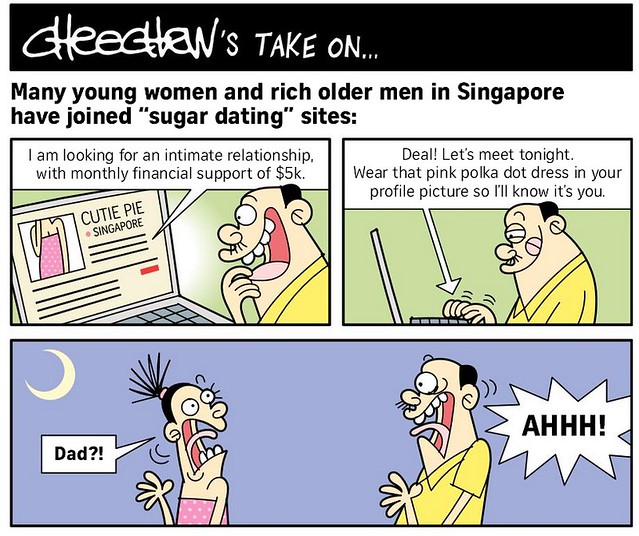 A money-for-love dating platform has attracted more than 20,000 signups from users here within a year of its launch, and is looking to recruit even more “sugar babies” in Singapore through promotions targeting undergraduates. (more)