Why Singapore’s “paper” general and “scholarship” system are not working 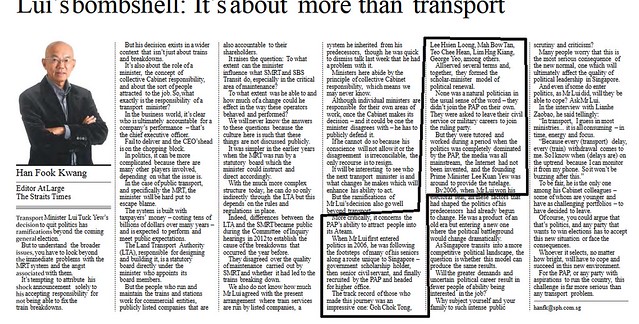 I can’t help but instinctively linked the dilemma and problems faced by Singapore today when I read the latest Insead‘s article and I quote:

“Not all leaders are equipped to deal with uncertainty. While many organisations have a Chief Risk Officer, very few appoint a Chief Uncertainty Officer. The military recognises that some leaders are better equipped to handle risk, while others are better at handling uncertainty. At the beginning of the First World War, the French commander-in-chief, Joffre, replaced 134 generals appointed in peacetime who were deemed ineffective in wartime.

As with risk management, leaders have to formalise the organisational appetite for uncertainty and develop and implement policies, tools and procedures to cultivate a culture that can adapt in times of crisis.

With corporate and military environments becoming increasingly similar civilian organisations can learn a lot from the solutions deployed by the armed forces to manage uncertainty.”

Singapore’s general are “paper” generals because they are “scholars” rather than hard fought proven generals. These so-called elites rise through the ranks with very little real field/combat experience. Many scholars rose through the ranks through planned promotions and rarely stay in the same jobs for more than 3 years (why then you think so many of these paper scholars can reach the rank of General in a short span of less than 20 years without fighting a real war which is unheard of in other countries? likewise for many of the Government scholars as well). They have never been proven able to lead effectively in a stressed scenario let alone in crisis situation. Let me quote another Insead’s finding:

“When the times are good, (almost) anyone can lead a firm, but when the storm hits and a company starts down the slippery slope into distress, the rules change completely.” source

With many of the cabinets and public-linked companies’ key positions occupied by many of these ex-“paper” generals and “paper” admirals, as well as “paper” scholars, no wonder we are facing all kind of distresses/mis-steps these days. Not that these scholar elites do not have the best intention to serve and manage, but they are not quite well trained to do jobs which require deep domain knowledge and experience in order to do a competent job. Thus you see Lee Hsien Loong in screwing up with the growth-at-all-cost liberal immigration policy  (more), Lui Tuck Yew and Desmond Quek in firefighting in the transport system, Mah Bao Tan’s lapses in housing policies. On a side note, Askmelah still have a hard time understand what Teo Chee Hian has done in more than 20 years in politics except raising civil servants’ pays in almost every ministry that he had “served”, he played it real safe if you ask me, no fault, no spark and continue to collect a fat paycheck for more than 20 years over and above the high pays in his Navy days, typical mind set of a careered civil servant (latest news from TCH for the wrong reason joining a list of growing list of personal attacks by the PAP leaders).

Examples of the current scholarship system is not working are aplenty if you bother to dig further. Don’t believe? See the famous quote of probably the last PAP’s outspoken people MP Inderjit Singh:

20. The government, aided by a meritocratic system of scholarship, has recruited some of the most academically talented individuals to lead the civil service. Yet in recent years I have heard in-creasing complains from average Singaporeans about a growing disconnect between them and the elite policy makers. In 1967 Dr. Goh Keng Swee in an interview for a Straits Times article entitled “Stop Behaving like Computers, Goh Tells the ‘Egg-Heads’”. He admonished that, “If the intel-ligentsia want to make a contribution to society, they must first understand what kind of society they live in. By society, of course, I do not mean the high society of snobs and socialites, but the people at the grassroot level: how they live, how they work, what they do in their leisure time, what they think of the world, their hopes, their fears and aspirations…because the intelligentsia are puzzled over the nature of the society they live in, such views as they express from time to time relate to abstract principles in vacuo”

21. I am afraid that we may have reached the situation chastised by Dr. Goh, that today’s policy makers live in a different society from the average Singaporean. During my MPS sessions I encounter a fair number of residents who question the rationale of government policies. They feel that the government does not understand their needs and concerns but instead craft policy while seated in, what effectively seems like a different world, an ideal clean and sterile policy lab or an ivory tower perched high up.

22. I urge the government to look at reorganizing the policy making process. To encourage for policy inputs from all segments of society at all stages of the process. I spoke about this a couple of years ago and suggested a more bottoms up process in policy making instead of continuing the current top down process driven mainly by civil servants who have don’t have a good feel of issues on the ground.

23. We will need to remove this elitism from the policy-making process, to reverse it to make it more bottom-up and driven by the man in the street. This will change the ways our policies are shaped and changed and I am confident that it will also lead to ministers having to deal with less fire-fighting as the policies were developed from a different and diverse perspective.

24. The top echelons of the civil service and government has been populated by hand-picked scholars who were chosen primarily on their academic achievements. Having the most academically talented Singaporeans in these vaulted positions it does pose certain problems. Many scholars are parachuted into high positions at a young age. They may lack the experience or understand-ing of the ground sentiment to effectively craft and implement policies that affect the majority of the population. We also risk the problem of group think if the decision makers are effectively ‘cut from the same cloth’. Having a bit of diversity even in the policy-making bureau can actually be beneficial, just as it is desired in any other team.

25. Let me share an example from our uniformed services. In the late 80s and 90s, our armed forces and police force focused on promoting many of the returning scholars to very senior positions very fast while those with less academic qualifications did not get similar opportunities to take up higher ranks in the uniformed services. The result over the years was stagnation for many of those with lower academic qualifications and finally retirement as they did not see their career go-ing anyway. This led to a rapid depletion of very good ground commanders replaced with high flying scholars who got the opportunities because of their academic success. I feel this happened for too many such good ground commanders too quickly resulting in loss of experience and the ability to deal with ground issues. The preliminary findings from the Little India riots do seem to indicate that there the lack of experience was as an issue. I hope I am wrong in my assessment of the type of leaders we have in some areas of the civil service because if I am right, we will continue to see many more problems simply because the policy makers don’t understand the ground issues and are far detached from the reality of what is happening and what is needed to improve Singaporeans’ life. We need the best people for the respective jobs not necessarily the best aca-demically qualified for all the jobs. As the largest employer in Singapore, the Public Service should lead the way in talent management.

Parting Note: Meritocracy and the whole scholarship system when first conceived in Singapore’s founding years were all well-intention and good. But many of these systems, like the CPF system and GRC scheme, have been tweaked and perverted beyond its initial good intentions and is becoming a growing cancer in Singapore and if not nip in the bud early, which no one in the current cohort of the leadership has the courage and will to do it, may prove to be the beginning of a slippery rope for Singapore.